Adventures and musings of a wanderlust

Mariska and I woke up and were ready for breakfast at 9am sharp.  Gerardo’s wife made us a breakfast spread that left no room for hunger:  rolls, eggs, vegetables, a fruit platter, smoothies, coffee and tea.  We sat at the table, stuffed, when Gerardo came in and sat down, making sure we had a good meal the night before, making sure the room was ok, and to see what we had planned that day.

I told him we wanted to go explore Old Havana (we were staying in Central Havana, only a few blocks away from the touristy Old Havana).  He whipped out a map and made a list of “must-sees” for us, and even mapped out the route that we should take.

I studied it carefully, as I hate pulling a map out in public, trying to remember every twist and turn that his route would take us through  (it didn’t stop me from having to pull out a map in public several times).  He looked up and said, “Relax,” as if he could sense my neurotic American energy, wondering exactly how lost I was going to get.

I, being the crazier one of the two of us traveling, asked him several follow up questions, as I do with everything in life.  He got to the point at the end of the trip where he would look at me and say, “What else?” as if he knew more questions were coming at him rapid fire as soon as he had his coffee in the morning.

Mariska and I hit the uneven, dusty streets, walking through the mobs of people, wondering when we’d hit something touristy as we were clearly not with any other stand-out blondes.  The buildings are run down, yet somehow beautiful because they have so much history.  We finally landed in front of a plaza with a wonderful cathedral in front of it, and I risked my phone battery to snap a few shots.

We wandered through the streets, hitting sites quickly, until we realized we had plenty of time to hit everything we wanted, so we could meander through and take our time.  Men kept yelling out at us, things like, “Hello Blondie,” and “You are so beautiful, and I’m so ugly.  We could be beauty and the beast.”  I had to admit that one made me laugh out loud, and as much as it annoys me to be catcalled, it just becomes part of the atmosphere by the end and easy to ignore, as it was very nonthreatening.  Such is the price of being a Blondie abroad.

There’s a slow charm about Havana that grew quickly on me though.  Its ability to be stuck in time was fascinating.  Even the lack of WIFI and no phone charger was refreshing by the end.  To be “off grid” and not really worrying about emails, Facebook, or texting until I got back went from stressful to giving me the peace of mind to only focus on what was happening directly around me without getting distracted.

We wandered through Obispo, to see all of the window shopping and stopped by Hotel Ambos Mundos, where Hemingway used to stay when he would come visit.  I had a fascination with the Hemingway version of Cuba, so insisted we check out the room.

The woman giving tours said they were closed for lunch, so we asked a guy that worked at the hotel if he could give us a good restaurant recommendation.  “One that you would eat as a Cuban, not a place to send tourists,” requested Mariska.

He asked us to have a seat and made a few phone calls, but couldn’t get us in anywhere.  He decided to give us directions to a restaurant, so we wandered to try and find it, but being directional delinquents, Mariska and I both couldn’t find the place he was talking about and ducked in a different place to grab a bite before heading back to check out the room.

When we went back, he remembered us, but told us that the room was still closed for an hour or two.  So we decided to grab a mojito at the bar and channel our inner Hemingways while waiting.  We met two Canadian men who were on their own Hemingway tour, and we confirmed all of the hot spots that should be hit up before we left.

Then our concierge friend came to find me at the bar to let me know they were opening up the room and that I should head over to the elevator to head up and check it out.  I appreciated how kind he was being, and it was pretty typical of Cuban people throughout our journey through Havana.

I appreciate it is his job, but everyone we encountered was friendly, chatty, and helpful.  Did they sometimes have hidden motives to sell something?  Absolutely.  But I figured take it or leave it and use my best judgment.  It was refreshing to be in a city of chatty people rather than people who ignore each other throughout the course of the day. 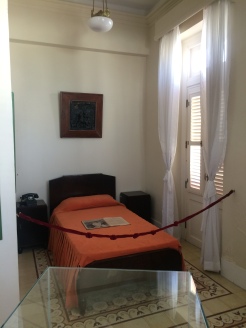 Hemingway’s bed at the hotel

Hemingway’s typewriter in the hotel 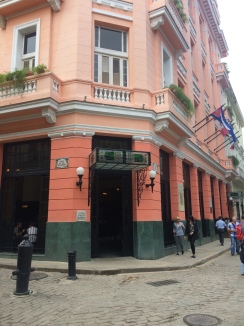 One thought on “Blondie Abroad–Cuba Part 3”